Skip to main content
/ Preparation Portal / Test Tips / How accurate does your spelling need to be?

How accurate does your spelling need to be?

How accurate does your spelling need to be?

No, don’t worry, I haven’t forgotten to use a spell-checker, I was just using some bad spelling on purpose to make an important point: you were all able to read and understand my question despite the 2 spelling mistakes.

So, how important is spelling?

In the OET test, spelling is a concern in 3 of the 4 skills but how important it is depends on the skill. You might think correct spelling is most important in the writing test but you would be wrong. Of course, you want your spelling to be as accurate as possible in this test but spelling is assessed, along with punctuation, grammar and vocabulary choices, in just 1 of the 6 assessment criteria: Language.

British or American versions of spelling are equally acceptable but you should be consistent with the version you use during the letter. Be aware of common spelling ‘problem words’ such as advise/advice and even ‘writing’ which some candidates like to spell with 2 ts! Your spelling doesn’t need to be perfect to get the score you want, so just make it as good as you can by becoming familiar with your own spelling problem words and learn to spell them.

Spelling accuracy is essential in Reading Part A

The skill which must have perfect spelling is Reading part A. Even 1 incorrect letter is enough for you to lose the mark for that answer in this test, so don’t throw marks away. After all, you can copy every answer directly from one of the texts. Take a few seconds after you’ve written your answer down to make sure you have copied it correctly. This is especially important if it’s the name of something as these are likely to be less familiar to you.

Spelling is less critical in Listening Part A

Listening Part A, on the other hand, is more relaxed about spelling. You should aim to be as accurate as possible but as long as the assessor can work out the word from your spelling, and it’s the correct answer, they will give you the mark even if the spelling is incorrect. Being a confident speller will mean you are not slowed down when writing your answers but equally it’s not something you should worry about for during the test at the expense of missing the next answer as the recording keeps going.

If you don’t recognise a word in the recording, your first choice should be to spell it phonetically and this will generally get round some of the tricky spelling combinations that exist in English. If the examiner can sound out your word they will understand what you were aiming at. For example, neumonia would be an acceptable spelling for pneumonia. The only time the assessor will not give you the mark is if you have spelt another word with a different meaning. For example, if you were trying to spell fracture but wrote it as ‘fraction’. In this case, the assessor could not guess that you meant the fracture not the one you’d written and you would score zero. How much do you know about the Speaking test?

Find out more details about the Speaking section of OET. 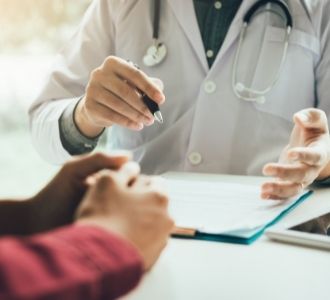 OET assesses your English language skills during the Writing subtest. Don’t get caught out diagnosing the patient. The speaking test starts with a warm-up section.